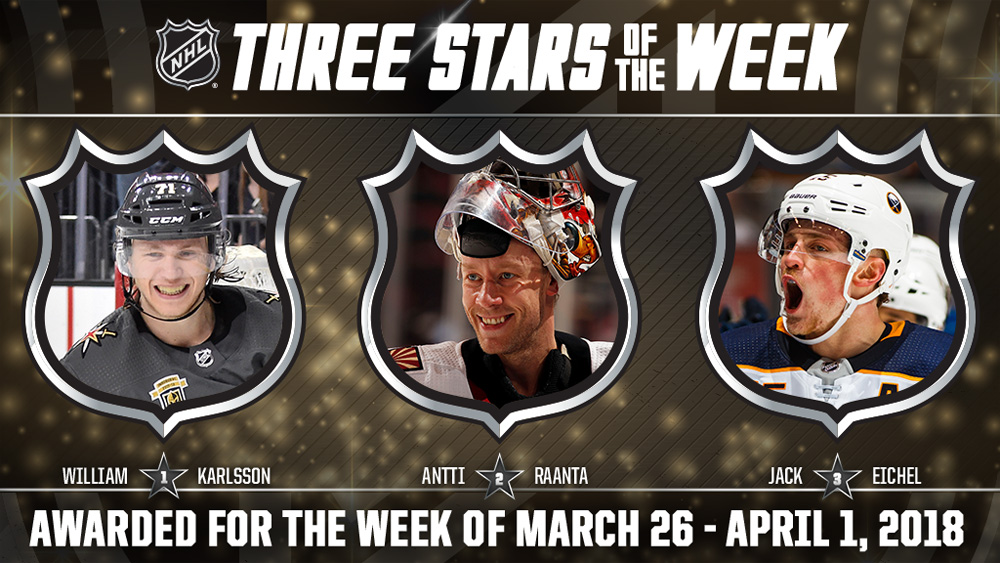 Karlsson led the NHL with 3-6—9, including a pair of shorthanded goals, in four games as the Pacific Division champion Golden Knights (50-22-7, 107 points) became the first modern-era expansion team from any of the four North American professional sports leagues to start from scratch and finish first in its division (excluding mergers and all-expansion divisions). He posted 1-2—3 in a 4-1 victory over the Colorado Avalanche March 26, becoming the eighth player in NHL history to reach the 40-goal milestone for a club in its inaugural season (and first since Brian Bradley in 1992-93 w/ TBL). Karlsson added one assist in a 3-2 loss to the Arizona Coyotes March 28 before again collecting 1-2—3, including a helper on the overtime winner, in a 4-3 triumph over the St. Louis Blues March 30. He capped the week with 1-1—2, including a highlight-reel game-winning goal (while shorthanded), in a 3‑2 division-clinching victory against the San Jose Sharks March 31. The 25-year-old Marsta, Sweden, native shares third place in the League with 42 goals in 79 contests this season (42-33—75) after scoring 18 times in his first 183 career NHL games prior to 2017-18 (18-32—50).

Eichel placed second in the NHL with 3-5—8 in three games to help the Sabres (25-41-12, 62 points) pick up a pair of victories. He scored twice, including the winning goal, in a 3-2 triumph over the Toronto Maple Leafs March 26 before adding another goal in a 6-3 loss to the Detroit Red Wings March 29. Eichel then collected five assists in a 7-4 victory against the Nashville Predators March 31. In doing so, he became the first Sabres player to register five points in a game since Jan. 31, 2013 (Thomas Vanek) and the first with five assists in a game since Feb. 10, 1993 (Pat LaFontaine). The 21-year-old North Chelmsford, Mass., native paces Buffalo with 25-37—62 this season (63 GP) despite missing 15 games due to injury.
at 4/02/2018