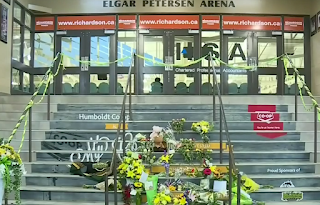 Had the Humboldt Broncos defeated the Nipawin Hawks in Game 5 of their SJHL playoff series Friday night, the Elgar Peterson Arena in the city would have been full on Sunday night with Bronco fans cheering their team on to what they would hope is a victory.

Instead of cheers echoing through the rink Sunday night, there will be tears as a vigil is planned for the 15 people who died on their team bus en route to Nipawin and the 14 who were injured when it was slammed into by a semi-trailer.

The service will be seen on Access Communications across Saskatchewan with Sportsnet and TSN also broadcasting the proceedings live from the rink for those who can’t make it.

Meanwhile, the grieving continues across Saskatchewan as people try to cope with what some people are referring to as the worst day in the history of Canadian hockey.

Dean Brockman was General Manager and Head Coach of the Humboldt Broncos for 17 seasons through 2014.

“It’s a very tragic day and it’s a very tragic loss. The saddest part is I believe it is only the beginning.” Brockman said.  There is going to be some longer days ahead. You hope the healing process starts as soon as it can.”

Brockman believes Humboldt and the Broncos will bounce back from the tragedy.

“The community is very resilient. There are so many great people out there. I know it will heal and it will bounce back, probably bigger and better than it was before”

The general manager of the Saskatchewan Hockey Association is Kelly McClintock.  Like others, he is devastated.

“This is tragic. “McClintock said. “Anytime someone within our big hockey community loses people, the impact is tremendous. It brings things to light.  Hockey is more than a game and the game isn’t that important right now.

Like Brockman, he feels Humboldt will get back on its feet, but it will take time.

“I’ve already had conversations with the Broncos and they need a couple of weeks to grieve and support one another because that is what we do.” McClintock said. “When the time is right, Hockey Canada and the Saskatchewan Hockey Association will do what is needed to get Humboldt the resources needed to assist families of the victims whether they were ones that were taken from us or were just injured.  We will be there to help in a variety of ways.”

Meanwhile, a GoFundMe page set up hours after the crash has resulted in almost four million dollars being donated.

While the names of the victims are not officially being released, they have been confirmed on social media by relatives or parents.